The Lost Tarot of Nostradamus

The Lost Tarot of Nostradamus

Michel de Nostredame, sixteenth French apothecary and seer, is best known worldwide for his visionaryinsights and collections of prophetic writings. First published in 1555, The Prophecies has rarely been out of print since his death, and has attracted a following that credits him with predicting many major world events-including the rise of Hitler, the assassination of Kennedy, 9/11 and, most recently, the Japanese earthquake and tsunami.

Less known is that in 1994, in the Italian National Library in Rome, a manuscript believed to be by Michel de Nostredame was discovered along with 80 mysterious paintings drawing heavily on the symbolism of the tarot. With great excitement, John Matthews and Wil Kinghan realized the implications of this work and, after much research, now bring it to fruition as The Lost Tarot of Nostradamus.

With fresh translations of the original quatrains by Caitlin Matthews, the astounding power of the prophecies is married to the predictive imagery of the tarot for the first time. This is, without question, the ultimate oracle from the primary prognosticator-and probably one of the most important decks of our age,

**Shop Special-The lower right corner of the box (still fully functional) arrived damaged. The set was opened to confirm the condition of the cards and book, which are pristine. 50% discount on this set. 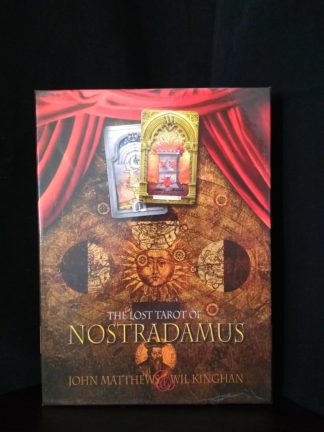 You're viewing: The Lost Tarot of Nostradamus $11.50
Add to cart